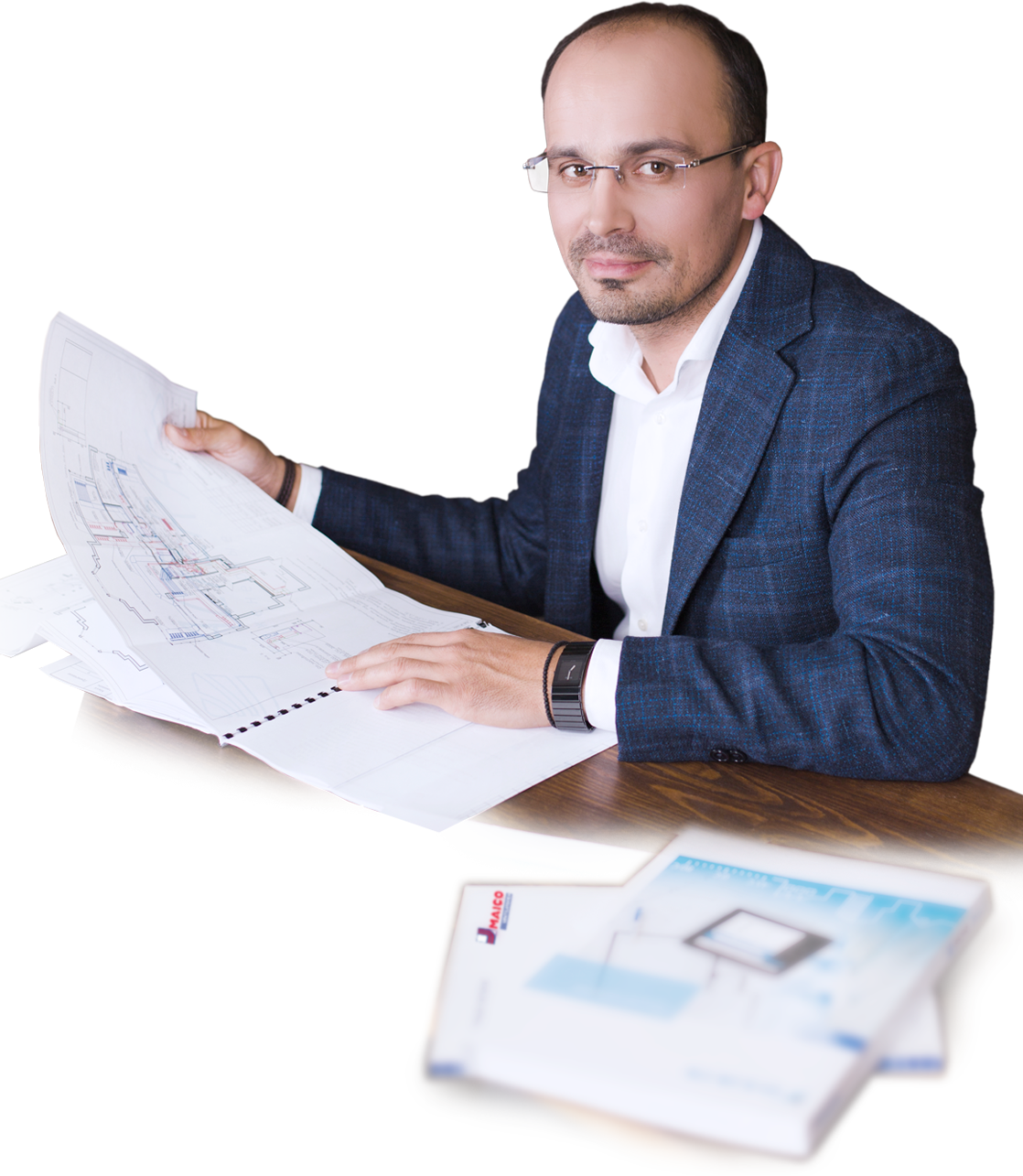 DENIS SOLOVEI: TO BE ENAMOURED WITH
YOUR OWN BUSINESS IS THE ONLY
SECRET OF SUCCESS.

DENIS SOLOVEI: TO BE ENAMOURED WITH
YOUR OWN BUSINESS IS THE ONLY
SECRET OF SUCCESS.

Success and luck are very relative and subjective things. Someone refers to these words when speaks about multimillion profits, another one – when speaks about a find of a crumpled small banknote on the street, and for the third one these are the first steps of a child.

Below I will tell you the story of my success, success and we never know, maybe my conclusions and thoughts help someone to find themselves and their own path.

A DREAM THAT
CAME TRUE

A DREAM THAT
CAME TRUE

I cannot say that right from my early childhood I wanted to become an engineer. Not at all! Although, if you think about it, the thirst for technology was already back then. Mainly it manifested itself in the disassembling of different things into small details, for what more than once I was told off by my parents. But I did it not because of mischievous behavior, I wanted to understand what the thing consists of and how it works (let’s say, for example, some kind of toy (and sometimes something more valuable came in handy).

Together with becoming more mature, came the realization that I want to connect my life with engineering. While other boys dreamt of becoming cosmonauts, I wanted to build rockets that would help make the stars a little closer. I always liked to understand the very structure of things – how everything works, understand the principle and design. I really enjoyed this.

Of course, it has been quite a while since that time, but the child’s delight which I feel every time I get to see the latest equipment at exhibitions around the world, says that, at some point, I have turned exactly where I had to and have chosen the only right path for me.

Looking back, I notice a rather interesting moment: all the major events and positive changes happened just when I needed them most. One such moment was the acquaintance of an ambitious though inexperienced freshman with the directors of the Stanad company Yuriy Petrov and Stanislav Nedashkovsky who were dealing with climate technology, the design of ventilation systems, air conditioning, drainage of air in pools. It happened back in 1998.

A year later, when I was in my second year of university, I was offered the position of sales manager at Stanad. I should mention that even then I earned quite well (especially by students’ standards), thanks to my online store of home appliances. But for the sake of new position, my own enterprise had to be shut down, but I have never regretted it, because during 8 years at Stanad I gained, in the first place, invaluable experience in the field of engineering, design and, moreover, negotiation skills.

At first I was engaged only in the sale of equipment. But this sphere was not that interesting for me without the connection with the other ones. Therefore, over time, I began to study logistics and management – so to say, the company from the inside. Noticing my enthusiasm, the leaders of the Stanad began to entrust me with more functions and give more opportunities for development. A few years later, I practically became their alternate and could fully run the company during their absence.

Working in this company not only armed me with an arsenal of useful skills, but also helped to clarify the main truths: only working for myself will help me to maximize my potential. Having reached the ceiling, some people can for years (if not decades) rest on that position and do not change anything, afraid to leave their comfort zone. I acted differently, wrote the letter of resignation and went practically in nowhere. Was it scary then? Of course! Do I regret about my decision now? Of course not!

THE MAIN PROJECT OF THE
WHOLE LIFE. YET.

THE MAIN PROJECT OF THE
WHOLE LIFE. YET.

The one who started a large-scale project from the scratch, knows well this mixture of joy, fear and enthusiasm, when you can spend hours, days or even weeks thinking about the smallest details, forgetting about sleep, food, and sometimes about the whole world around you. The same it was with Alter Air.

Everything big necessarily starts with something small. In our case, it all began with the registration of the individual entrepreneur Solovei D. V., which grew into the project and assembly organization Alter Air, founded by myself and my longtime business partner Yuriy Makovskiy. Worth mentioning, that we were thinking about the name almost a year, trying to create a unique brand, completely different from others. The word combination Alter Air seemed to us quite attractive, not only reflecting our specialization, but also signifying a completely different, alternative approach in our field.

It’s funny, how the name eventually turned out to be almost prophetic, since in 2011 the company began to engage in alternative energy. But this stage was beyond our reach at that time, and during the first six months of its existence, a rented apartment served as the main office of the company, and at the beginning we worked almost on bare enthusiasm.

But life works so, that if you do something qualitatively and professionally, if you do your best the whole way, if you literally live your business, then success will certainly knock on your door. And it happened so in my case.

SUCCESS COMES ONLY TO THE ONES
WHO DESERVE IT

SUCCESS COMES ONLY TO THE ONES
WHO DESERVE IT

Right at the very beginning, while thinking through the concept of my future company, I firmly decided that the priority for us should be not only the sale of high-quality equipment, but also the provision of engineering and installation services, at unprecedented level within Ukraine. What was necessary for achieving this? At least, a leader who does not chase short-term profit and a team of like-minded professionals.

“I truly believe that everyone should do their own thing, what they are really good at. ”

Moreover, you have to love your business, believe that it is to benefit other people, to make this world a little better. If such thoughts visit you less and less often it means that you need to change something.

I do not have a goal  just to sell clients more expensive equipment. It should be exactly the equipment that they need and it has to function exactly as it was designed. And in order to achieve this I do not mind spending a few additional days. Of course, someone may say that this is not the way business is to be done, but I’m sure that this is just a matter of short-term and long-term prospects for companies and their leaders’ scale of thinking.

But desire to sell people perfect engineering solutions, of course, is not enough. We need employees. And not just employees, but people who are ready to share with you the burden of responsibility for the final result and the name of the company. To gather around yourself a team of same fans of your business as you – is one of the most difficult tasks and without the solution it is impossible to create a successful project. However, over the years I have learned to almost unmistakably identify people who will become not just employees, but real members of our large family.

A lot of successful companies have collapsed not because of someone’s mistake, but because of management’s decision to rest on their laurels. I think that such situation does not really threaten me, because if life has taught me something, it has to be the need for constant improvement.
I am developing not only myself, but also my projects, starting with Alter Air, and ending with a completely new and, I must admit, very ambitious child called Solovei.

Over the long years of work, I have accumulated quite a lot of experience in designing and installing the most complicated systems of ventilation and air conditioning, heating and water treatment systems. I implemented the projects of buildings that function only at the expense of alternative energy and “smart house” systems. Of course, I have always shared all this experience and knowledge with my clients as much as I could, but it is sometimes impossible to keep track of everything personally.

The Solovei Projectis the concentration of all my knowledge and skills on the exact, the most interesting and challenging tasks. Customers will get the maximum of my attention, a whole new level of communication with me personally throughout the whole working day, and of course, projects and solutions of the premium class.

09
More than 9 cities
in Ukraine

IT WAS WRITTEN
ABOUT ME:

IT WAS WRITTEN
ABOUT ME:

MY WORK IS
MY REAL PASSION

MY WORK IS
MY REAL PASSION